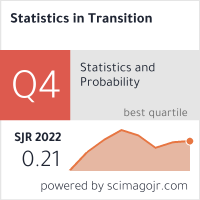 The journal provides a forum for exchange of ideas and experience amongst members of international community of statisticians, data producers and users, including researchers, teachers, policy makers and the general public. Its initially dominating focus on statistical issues pertinent to transition from centrally planned to a market-oriented economy has gradually been extended to embracing statistical problems related to the development and modernization of the system of public (official) statistics, in general.

Authors are responsible for providing us with the statements of obeying the rules of ethics and quality assurance, as set up in our Ethics and quality assurance policy, in particular, that the submitted paper is original – has not been previously published in any form nor is currently considered for publication elsewhere, or an explanation regarding what parts were published before, and other details (where and how, etc.).

All the submitted papers are double-blind peer-reviewed by high-level academicians and other experts (including policymakers and practitioners).

The full content of the articles published in Statistics in Transition new series is made available on the Internet on an open access basis, i.e. free of charge and with no technical restrictions.

is applicable in Statistics in Transition new series starting 1 January 2022. This means that the authors who submit their work for publishing in Statistics in Transition new series grant a non-exclusive licence to the publisher, retaining all their authorship rights. The user of a given work may share it (copy and disseminate it in any medium and format) and adapt it (change it and create new content on its basis for any purpose, including commercial), on the following terms:

Other articles included in the journal may be used on an open access basis as per the law on open data and the re-use of public sector information.